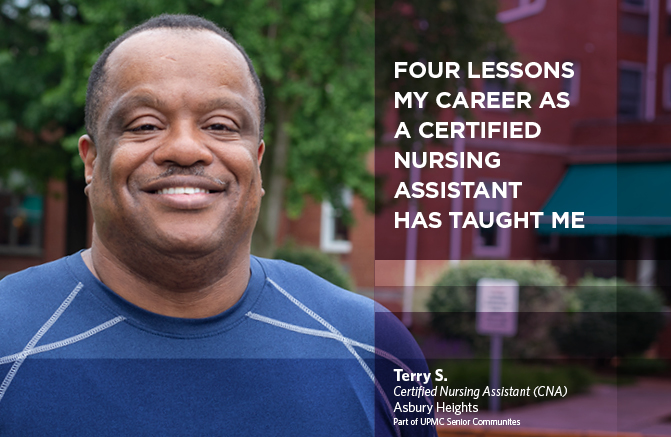 Meet Terry. He’s a Certified Nursing Assistant (CNA) at Asbury Heights, part of UPMC Senior Communities. At first glance, Terry’s responsibilities are pretty simple: taking care of the residents of Asbury Heights and meeting their basic needs. But spend a few moments talking with Terry, and you’ll quickly pick up on his inspiring perspective. His job is more than just a job; it’s an integral part of who he is.

Take five minutes today to learn from Terry about the impact his career as a nursing assistant has had on him.

While there are other fields of work which require less emotional investment or less hands-on work, Terry knows that his work as a nursing assistant is contributing to a greater good that’s much larger than just him.

Terry spent the first 11 years of his career working in logistics with the U.S. Air Force, a position that required him to travel extensively. Yet everything changed for him when his daughter was diagnosed with autism, and he knew that he needed to make a career change to give her the life she needed.

Given Terry’s passion for caring, health care was a natural fit. As a nursing assistant, Terry is in a position to care for others with the kind of love that his own daughter receives from other caregivers. “If she’s going to have a good life, it’s up to the people who care for her,” Terry said. “It gives me a different perspective on what I do. It’s not just a job that I come to in order to make money—it’s more than that to me.”

2. Sometimes you need to go above and beyond

When you’re caught in the day-to-day cycle of working, it can become easy to cut corners and make excuses for your work. Terry simply doesn’t believe in living that way. Because he knows how essential his work is to his patients’ happiness, he is always willing to take that extra step for them.

It’s not just a job that I come to in order to make money—it’s more than that to me.

“It’s the little things that matter—whether you’re willing to help them out when they need help, pay attention to what time they want to get up, what they want to wear, or what they want to drink. All of those things affect not just someone’s day, but whether they have a nice life here at Asbury Heights.”

It may sound simple, but Terry knows that those tiny interactions can make all the difference for his residents. “If a patient says they’re hungry and they missed dinner, I don’t say ‘well, the kitchen is closed.’ I go get them something from the café. I wouldn’t want that to happen to someone I love, so I wouldn’t want it to happen to them.”

As a nursing assistant, Terry gets assigned to certain patients for whom he is responsible, but he takes pride in caring for all of the residents at Asbury Heights, not just his own. “I never ever say, ‘That’s not my resident.’ I just don’t believe in saying that. I have assignments, sure, but if someone asks me, ‘Where’s my aide?’ I just ask, ‘What do you need?’”

Nevertheless, Terry was quick to tell us that he is not the only Asbury Heights nurse with that mentality. He knows that if he was flying solo in caring for his patients, his work would quickly lead to burnout. “I’m not the only one here with that perspective. If I was, I think I’d try to find somewhere else to work, because you just can’t do everything. Everyone else here also feels the same way.”

Terry makes up just one of a community of caregivers who are able to give the residents of Asbury Heights the care they deserve.

4. My career can have an incredible impact

Prior to beginning his career in health care, Terry says that he didn’t realize just how important the work of nursing assistants is. “When I started, I didn’t know that I had the responsibility of making my patients happy. How well their day, their week, their month, and their life goes depends on the care of their nurses. I realized that really quickly, and I decided that [responsibility] was the best part of this job.”

Now that he’s spent over a decade in his career, Terry is proud to advocate for the importance of nursing assistants. “I truly believe that if patients do not have good CNAs, if they’re in a place where they don’t have aides who care, residents suffer.”

“Here, the connections you make with the residents are long-term. Here at this place, you really do have a say-so in the vital stages of your patients’ lives.”

Are you ready to discover how your career can serve your community, just like Terry? Explore open positions at Asbury Heights and other UPMC Senior Communities. #YourCareYourCommunity