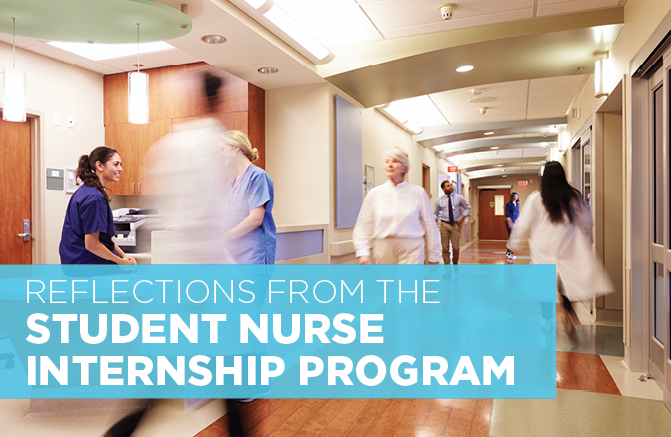 Our 10-week Student Nurse Internship program offers soon-to-be graduate nurses excellent hands-on training in an engaging, dynamic atmosphere. For many, this program serves as the first chance to turn classroom knowledge into real-life application. With preceptors as guides, these interns quickly become highly-valued members of their nursing teams, and are given authority and opportunity to make independent clinical decisions. It’s a very rewarding experience! Upon completion of the program, we ask each intern to reflect on a particularly meaningful patient care experience, sharing how it has influenced them in their nursing career. Here are several stories from the 2015 class!

It was approaching the end of an exhausting evening shift when my preceptor and I heard over the intercom “Condition C.” We were working just a floor below and without a word my preceptor and I rushed for the stairs! When we arrived at the scene, we saw a young blonde woman in respiratory distress, desperate for a breath of air. Due to her experience responding to similar conditions on the floor, my preceptor immediately jumped into action without hesitation. For me, however, this was my first time and I felt my body go tense. The room was roaring with a large, determined health care team. I stood there frozen by the intensity of the room, watching this patient struggle – it was excruciating. I felt as though there was nothing I could do because I was ‘just a nursing student’!

Finally, though, I caught a glimpse of the patient’s face, covered in terror. I snapped out of my fear as I heard her hollering “Am I going to be okay?!” in between each frantic gasp for air. She looked around the room for reassurance, but the team was busy at work making sure she would be okay. I grabbed her hand with confidence and she squeezed back as she sat up to make eye contact with me. We stared back at one another and I assured her that she had a remarkable team fighting with her for her life. She leaned back into her bed with a look of relief. Then, she began responding positively to the commands of the respiratory therapist.

Following this encounter, I walked back to my unit with an overwhelming feeling of happiness. For the duration of my internship, I never thought of myself as ‘just a nursing student’ again.

It was nearing the end of a long, uneventful daylight shift for me and my preceptor, and the nurses on the NICU were busy running around, attempting to wrap up their work in time for shift report. At 6:15pm, my nurse and I received news that we were finally getting an admission! As soon as our new patient – just hours old – came into the room, we began our assessments. He was a very sick neonate, and it turned out to be an extensive admission process; when I eventually looked up at the clock after what I thought had been maybe 30 minutes, it was already 7:20pm! Throughout the entire process, the room was absolutely packed. Doctors, nurse practitioners, respiratory therapists, nurses, and others that I did not even recognize had all crowded into the room. Despite the packed room, I could not miss the additional faces that kept popping in every five minutes or so. They belonged to other nurses, who stayed after their shift reports were given, just to make sure that this little patient had enough helping hands. It was easy to see that they all had sincere, genuine concern for this baby – they were strikingly selfless in their efforts. Not one detail was missed, and our patient finally stabilized, thanks to the sincerity, altruism, and unity that was so evident among the nurses that day.

Caring for a Friend – K. Hopper

Throughout this internship, I have had many interesting patient care experiences. However, one that stands out from the rest is my first night shift of the summer – it was the first of three in a row, and I was terrified! Upon arrival, I received my patient assignments and quickly realized that a friend from college was one of my patients.  I knew she had been diagnosed with a brain tumor this past school year and was holding off on surgery because she feared her appearance with a shaved head and staples.  In fact, I had just seen her mother’s post on Facebook that morning that it was finally the day her family had been dreading and anxiously awaiting for months.  What a coincidence, that out of all the units, beds, and patients in the hospital, I was assigned to her care team!

When I walked into the room to greet her and tell her I would be taking care of her with my preceptor that night, she instantly lit up.  She was actually excited that one of her older peers in college was now helping her through her recovery! Following surgery, she progressed well and shocked her mother in the morning by asking for a photo to share with our fellow friends from college on social media.  Her mother thanked me multiple times for my help and encouragement because her teenage daughter who had been so scared of how she would look was now proud to post a photo of herself at 7am the day after her surgery to let friends and family know she was doing well.  It is patient experiences like this that inspire me to be a nurse in order to help better the lives of my patients!

Would you believe that a fun photo shoot with a blue “Katy Perry” wig was the highlight of my internship at UPMC Shadyside Hospital?  This experience is significant, as it taught me to remember three very important things: put yourself in someone else’s shoes, care for others how you would like to be cared for, and always make your compassion for nursing and providing quality care known.  These three concepts have been intricately woven into many unique patient care experiences this summer.

For this internship, I was placed on a hematology oncology unit, where most patients have been diagnosed with leukemia. One female patient on the floor particularly feared her approaching hair loss, and she opened up to me about her feelings, saying that she was scared because she had never even had short hair, let alone none.  This woman happened to have a daughter who hoped “mommy’s hair would grow back blue,” so the day following our conversation, I brought in a blue wig!  We had a photo shoot, making funny faces and trying out different poses with her stylin’ new hair. Though this experience may seem as though it barely encapsulates the nursing profession, this moment is what it’s all about, in my opinion!  As the biggest smile appeared on my patient’s face at the sight of the wig, I couldn’t believe that such a tiny gesture could make such a big difference.  The experience brought positivity, laughter, and excitement to my patient as she sent the pictures to her family that morning.  Shown in many different ways, compassion always goes a long way!

The brain – arguably the most complex organ in the entire body – can be both amazing and scary at the same time. While working on a neuro trauma unit, an important lesson I learned was how to care for patients who are unable to communicate for themselves.

My preceptor and I were working night shift when we received a patient who had been in a motor vehicle accident that left him non-communicable in all forms – he could not talk, move, or even blink. However, even though he could not communicate, the first thing we did coming into the room was introduce ourselves. Every time we interacted with the patient, we made sure to explain to him what we were doing before we did the task. We made it a priority to turn and reposition him every two hours to protect his skin and we also gave him a bath and fresh sheets. In report, we learned that the family said the patient loved country music, so we put a country music station on a radio beside the patient’s bed for him to listen to for a few hours. We also gave him intermittent periods of quiet rest and put the morning news on for him when it was daylight. Through this patient care experience, I learned the importance of anticipating a patient’s needs, especially when he or she cannot express them verbally. Treating all patients with the same level of dignity and respect, and always putting yourself in other’s shoes are essential components of providing quality patient care!