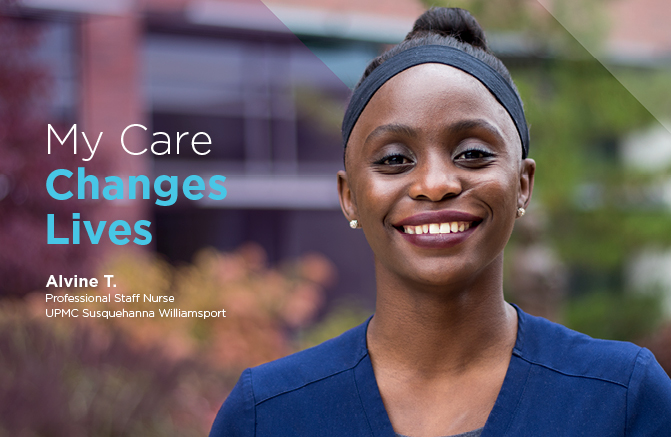 If you have ever set foot into the medical world, then you have probably been impacted by the work of a nurse. All across the country, nurses are the caretakers, advocates, teachers, and friends who make caring happen.

Come along with us as we open the doors to the world of nursing. What does it take to be a nurse? What kind of impact do nurses have on their patients? Why is nursing such a meaningful career?

It’s time to hear the stories of how nurses change lives.

Alvine T. learned from a very young age just how much health care matters. Born and raised in Kenya, she regularly observed how the people in her community suffered from a lack of access to health care and a lack of health education. Often, Alvine’s neighbors would wait until the last minute to get to the nearest hospital, which was almost an hour and half away from her village.

Alvine remembers one day in particular, when a young boy in her village fell ill and needed serious medical care. His mother didn’t have a car, and transportation was difficult to find. By the time the child’s mother was able to get him to the hospital, the doctors said that there was nothing they could do – and the child passed away. “It happened in a span of hours,” Alvine said. “That really weighed heavily on my heart as a child, and I thought, ‘I want to do something to be able to help.’”

Motivated by these experiences and a desire to care for her family, Alvine set her mind on pursuing a career in nursing.

In Kenya, getting federal aid for college is not an easy task, and Alvine couldn’t afford to pay out of pocket for her schooling. So in 2006, she left her home country and moved to America to pursue a nursing education.

After meeting her future husband at a small college in Virginia, she transferred with him to Pennsylvania College of Technology, located in his hometown of Williamsport, PA. Half a world away from where she grew up, Alvine launched her nursing career in her new home, where she now works as a Professional Staff Nurse in the Med-Surg unit at UPMC Susquehanna Williamsport. Despite the vast differences from where she grew up, Alvine’s work in Williamsport gives her the same fulfillment that drove her into nursing from the start – caring for her community.

“To me, nursing is more than just knowledge,” Alvine said. “It’s more than what you acquire at school and the knowledge of passing medication. That’s why I love nursing so much, because I get to bond with my patients. If this is going to be their home for seven days, I might as well be their family, and make it a home away from home. That’s the part that I love about nursing.”

Alvine takes that nurse-patient bond very seriously, and she is proud to act as a resource for all who need her – both her patients and her own family. Back home, Alvine’s family looks to her to be a knowledge provider, which has driven her to go back to school for her Master’s and pursue a career as a nurse practitioner. Every day she strives to provide the best possible care to the Williamsport community, no matter what they’re going through.

Earlier this year, Alvine bonded with an elderly patient who came into the Med-Surg unit with Stage IV cancer. Throughout his several stays in the hospital, Alvine connected with him and established a great rapport, often taking him for walks, encouraging him in his recovery, and offering his family support through difficult medical decisions. Sadly, the patient’s health continued to fail, and he started to decline.

When the time came for the patient to choose whether to go home or go into hospice, he turned to Alvine for help. She offered her counsel to him, and when the patient chose to move into hospice, he had one simple question for Alvine: “Will you come visit me?” For Alvine, that moment meant everything. “This is the moment that makes nursing worthwhile for me,” she said.

With connections in two vastly different places, Alvine’s heart now resides in both Williamsport, PA, and Kenya. But no matter where she is, Alvine’s love for nursing allows her to do what she does best: providing care that changes lives.

Are you ready to discover what a nursing career at UPMC could mean to you?